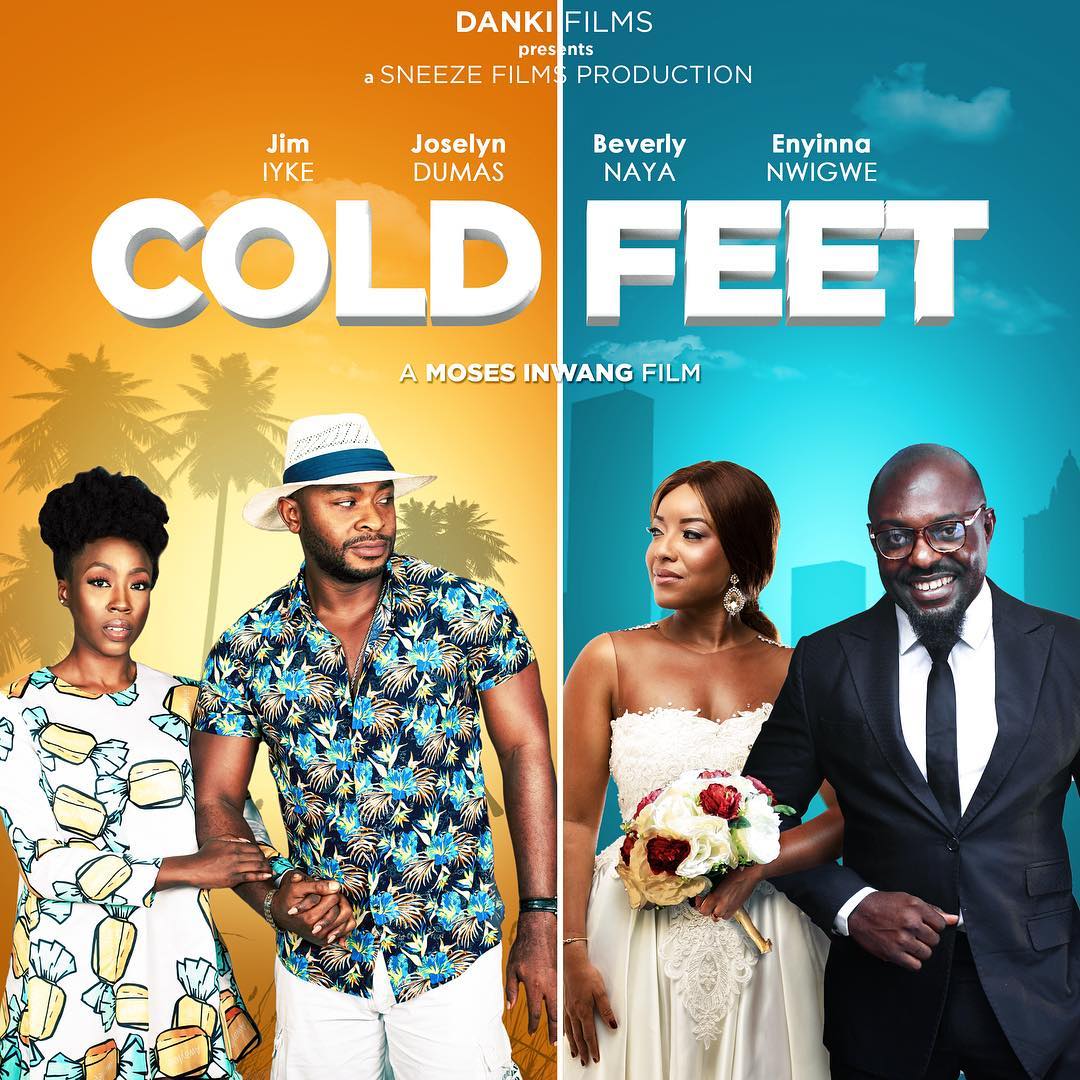 There was just something nice about this simple movie called ‘ColdFeet”, I loved the way the movie started with a bit of suspense and the surprise party thrown for Omoye by her Husband Col Mayowa Rtd.

This movie reminded me of Nkiru Omeili’s movie of 2016 “A couple of Days” a movie of about 3 couples that went on a vacation to Ibadan, where so many secrets were revealed and almost destroyed their marriages.

It had a similar storyline but a different twist, here we had just 2 couples and in this case only one part of each couple knew the other and had met before some years back. One couple who had being married for like 5 years and the other unmarried couple where the guy “Enyinna Nwigwe” was so scared to pop the big question to his longtime girlfriend, who on the other hand was tired of waiting for him to ask her to marry him, This was a true movie about fighting for love and marriage, I was glad it ended well.

Produced by Darlinton Anyiam-Osigwe and directed by Moses Inwang who also worked on “Omotola’s Jalade Kehinde’s movie” of 2017, ‘Alter Ego”, he is an award winning producer, so I was sure they were going to create a beautiful movie.

A few of these nice things were the production, cinematography, the resort and locations chosen both in the city and Akwa Ibom, the angle of trying to portray the rich cultural aspect of Nigeria, their people and hospitality, it did open my mind to how beautiful the resort Is and I hope to visit there soon.

Movies like this help to showcase the positive side of Nigeria and our traditions, the movie which was about 100 minutes long didn’t seem so long at all, as a few lessons were also well passed.

Jim Iyke who was known as “Col Mayowa Rtd.” Played quite a funny distinct role from what we normally know him for “the usual play boy; every lady’s man”. In this movie he played the role of a very responsible married man, who loved his wife dearly and was faithful, on the contrary his so holier than thou looking wife turned out to be the unfaithful one here.

They had being married for 5 years and to celebrate their anniversary; he decided to plan a romantic getaway trip, where they could be alone for a few days, without worrying about their kids. He had planned the entire trip and even gotten approval from her boss, for them to travel to Akwa Ibom, it was a lovely experience and they were cool, till she bumped into Tarry “Enyinna Nwigwe” a guy she met 5 years ago in Abuja on a business trip a few weeks to her wedding.

She was so shocked to have seen him there and kept wondering why they had to see each other after so many years, she thought she was never going to see him again and therefore had tried to wipe him out of her memory.

Well I guess I would have to stop my review here, so you could go watch the movie and understand what happened 5 years ago, how they able to manage the crisis that was about to ruin their marriage and relationship respectively.

It was a simple movie but there was just something about the way the cast brought each role to life, that made you just smile as the truths unfolded.

Although there was nothing exceptional or extraordinary about this simple movie, there was just something about the way the actors brought their role to life that made you laugh along the way. There were mixed emotions of joy, anger, suspense and fear of Omoye being caught by her husband, at a point we all prayed that she would make the best choice of not giving up on true love for a temporary fling.

To my verdict I would say 7/10 because it’s not a bad movie after but, there were still some vacuums which needed to have being filled for me. Also I would suggest that movie producers end the movie when the excitement and applaud is still very high and avoid adding unnecessary scenes at the end that could have being avoided in the quest of making it long enough.

Thank you for reading, and following on all social media platforms.