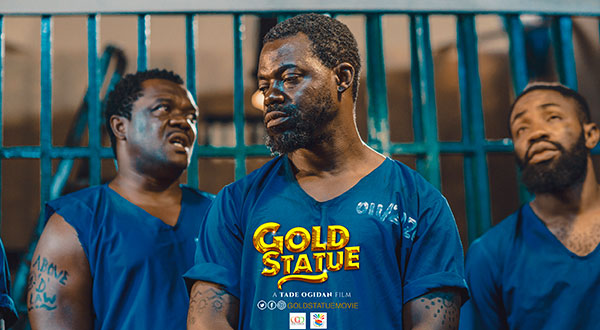 It was so nice and refreshing to see a beautiful Nigerian movie in the cinema and we were happy and excited to have the veteran producer Tade Ogidan, produce a very good movie. He produced blockbusters like  “Dangerous Twins” in 2004 and “Family on fire” in 2011.

This time around he brought back all the great veteran actors from his previous movies and they totally killed it. I just loved the way they told the story and linked each scene together.

The movie told the story of 2 young guys who went on an adventure in search of a Gold statue believed to have been a deity inherited by generations that were worth about $500m dollars. In trying to locate this Gold statue they will have to do the unimaginable to allow them gain access to where it was buried and then get it out.

I must commend Tade Ogidan for putting together such a lovely storyline and keeping us entertained all through, there was a very unique blend of drama, adventure, suspense and comedy and yet the message was well synced and disseminated to all.

There is something about having a nice storyline, which is well connected and a fantastic cast to bring it to reality. This was in a perfect match in this movie, a few locations chosen, but it was very okay, nice cinematography, production and lovely finishing.

I definitely had some restrictions to this movie, which will be my only complaint, which was the fake background and locations chosen for some scenes, it was obvious that those scenes were shot in a studio and not the right places displayed, the prison scenes, the London scenes and the Dubai scenes, could have being shot better, but I guess they were trying to cut cost and keep their expenses low.

But for us the viewers, if you have to show those scenes, then you must make them as real as possible no fake backgrounds should be used, or you skip the scenes.

Wale “Gabriel Afolaya” and Chike “Kunle Remi” were best friends from school and attended the same lecture where they learnt about an ancient Statue, Wale decides to seek for more information from his grand dad, he planted some hidden cameras in his room, hoping that before his death he would disclose the exact location of the statue.

On his dying bed he spoke about it and with the help of their friend in London they were able to find the exactly location of the gold through google maps. We all couldn’t stop laughing when we found out that the location of the statue was in “Ilesha Prison” and that Wale would have to leave his NYSC location to move to Ilesha, work on committing a serious crime and hope it will send him to jail where he will start seeking for a way to get the statue from under the inmate cells.

This movie was extremely funny with the array of comedians who well in jail for varied reasons and all needed a way out.  Wale was able to lure these guys to believing that there was a way out through the underground map, and he used them for almost one year, until they found these famous ancient of days statue worth billions in Naira.

You sincerely need to see this movie to understand how the desperation for wealth could lead you to do unbelievable and unimaginable things.

With no doubts I would definitely be recommending this new movie, because I totally enjoyed every bit of it, despite the fact that it had comedy, drama and adventure together, the movie didn’t lose its substance at any point.

I was also very happy seen all the old popular actors together in this movie and they surely didn’t put up any show less than my expectations, even though the movie was about 125mins long.

We just couldn’t have enough of the fun and excitement and the end of this very movie was even better than the beginning, so make sure you wait for it. The beautiful storyline, the impeccable acting by each actor and unexpected end are a few things I can’t really stop talking about, I am certain you would have a good laugh and also find it as intriguing as I did.

Now before I forget, my verdict for this beautiful movie is 8/10. They totally did a good job with the quality of production, cast and make up apart from a few slight hitches, it was a very good movie.