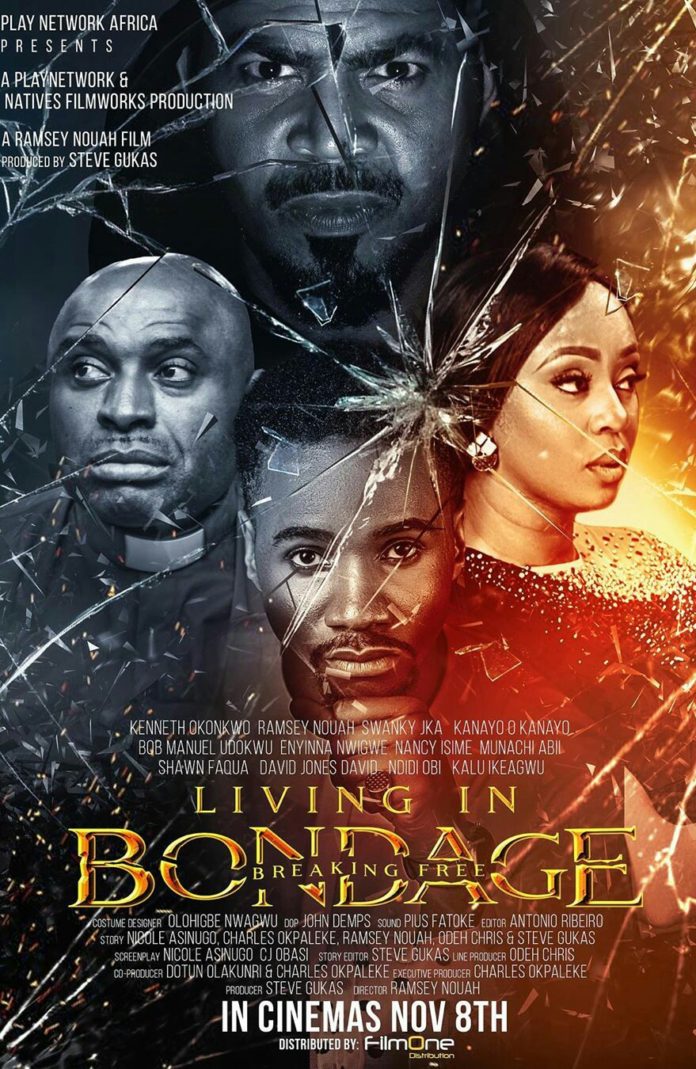 At first I was really worried and extremely skeptical at what they were going to put `in the new “Living in Bondage” sequel, I kept thinking and doubting that they would be able to put out a good show, but I was very wrong this time. I am still thrilled and excited about this new movie, the movie was amazing and outstanding and I mean every word of it. They obviously surpassed my imagination and expectation exceeding the usual Nollywood benchmark. When I talk about a movie, this is definitely going to be one of them, they sure will make it to my top 10 Nigerian movies of 2019, they really did a good job with this movie, it’s clear that our producers aren’t joking any more, they are putting in more work and paying better attention to details. Come to mention, this is Ramsey Noah’s first produced movie, and he totally killed it. We are sure to expect much more from him in the future. Sincerely this is a movie I can put at par to my famous benchmark movie of 2018 “King of the boys” , and I have being thinking, I still think “King of the boys” is my favorite in terms of story, connectivity, originality, suspense, and intrigue, but “Living in Bondage” was certainly exciting.

So to the elements that made this movie extremely exciting for me, Firstly the storyline and the link back to the first “Living in Bondage” which was released about 26 years ago was just so epic, I really couldn’t figure out how they were going to link and connect this new story, wondering if they were going to shoot something different but with a few familiar faces. To my greatest surprise they were able to resurrect a convincing story and we were thrilled. The production of this movie was so crisp and clear, no poor scenes at all, that you would almost think or assume that it was a foreign movie, I feel that the producer of this movie deserves some accolades and might bags some awards, because they did a good job. The cinematography and sound track also killed it, making it one you could connect with. The chosen cast for each role absolutely killed it, I really couldn’t find a fault with anyone of the cast, even the not so popular ones played their roles perfectly like they were born for their respective roles. Ramsey the Don himself was just so on point, the costumes and makeup was very good, the timing was just right, not so long and the scenes didn’t really drag, it was just a bit above 2 hours, and when it was over, we all didn’t want to leave.

The movie started quiet slowly and then quickly moved on to the main scenes which were around the lead actor Nnamdi Okeke.

I must advice that you listen attentively read the English translation pretty fast as they had some of the scenes in Igbo language which I found pretty cool. For those of you who have also forgotten the first edition, it would be nice for you to quickly see it one more time to understand this better. So Andy Okeke who used his lovely wife in the first part had become a pastor here, he had no clue that he had a grown up son called Nnamdi till one blogger who had being carrying out a research on the blood money group found him and informed him after he had seen his long time lost son with the popular notorious bad gang, Richard Williams and Chief Omego. Nnamdi was desperate for wealth and affluence and he was willing to go to any length to make it big in Lagos, even if it would cost him a life. Nnamdi wanted power and wealth, but wasn’t sure what it entailed to have it. The entire movie showed us how Nnamdi went from grass to grace in a span of 3 months and he was everywhere. The whole problem started for him, when it was time to pay back, one thing I learnt from this movie,

“ The Devil never gives you a free gift, when you accept affluence, wealth and power, will you be willing to sacrifice what comes with it?”

Nnamdi learnt the hard way just like his father and understood that hard work and time is key to success not quick money scams.

To my verdict I would rate this movie 9/10, sincerely I did like the cast and I felt they did put up a good show. I can go on and on about this movie, because they really put in a lot of efforts and you can see it. I kind of like the end even though I felt it was cliché, but anyway I guess they needed to end the movie on a good note and prove some point. Well to all the drama and history movie lovers, I would recommend that you check this movie out, I totally enjoyed it and I am sure you will.