To get a clearer picture and understanding about this new movie you would need to gosee the Part 1 to get a better picture of what is going on here.

This edition is a sequel to the first one released in 1994. They tried to relive the story and add a bit of twist to it by putting up a good show and bringing in new cast. I guess I went in with loads of expectations and they were all not met.

Idia Aisien played the lead role as “Nneka”. The movie tells a story of how her parents were murdered in cold blood in her presence and how she had to run for her life to avoid being killed also.

She grew up and moved to city where she lived a very difficult life struggling to feed. She found a menial job in a restaurant where she served and washed dishes, she had a very close friend “Bimbo Ademoye” who played the role as her colleague and best friend who was always there for her.

Nneka had series of night mares daily and this distorted her sleeping patterns. She never told anyone about them but knew she was being manipulated. One night she went to the beach, dived into the river and got initiated afterwhich  she was sent out to kill the members of a very strong cartel. Llittle did she know that she was being used by the wrong person to kill the innocent ones but it was too late.

You will need to see the entire movie to see how she was rescued. 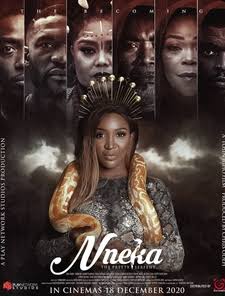 To my verdict I would score this movie 6/10, I guess my expectations we were higher than the output itself. I had already heard lot of reviews and complaints so I was waiting for it. I liked the cast and the location.

I think they played their roles well but there was just something wrong with the movie and the output as the delivery wasn’t world class and this left a bitter sweet experience in the minds of many.

If you like Nigerian Mystery and Horror you might want to try this movie out and let me know what you think.